< Make Failure Your Friend
I Groan, Roll My Eyes, Annoyed >

My Mothers World. My Emancipation 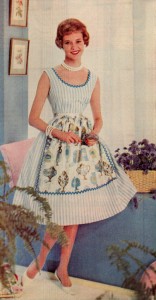 My mother, wearing a white collared blue wasted dress with a soft petticoat, nylons and white pumps, waved me out the door to join the other neighbor kids walking to school. She had risen before the rest of the family, prepared a well balanced breakfast for us. Poached eggs in milk over buttered white toast, bacon, half a grapefruit broiled with brown sugar on top with a glass of orange juice. I never did know what she did the rest of the day while I was in school. I just assumed she sat and waited for us to come home.

We were greeted with a freshly baked cookies and milk. The house was clean and tidy house with the aroma of dinner simmering. As I worked with my #2 pencil forming lowercase letters on my new tablet, or watched The Woody Woodpecker Show on TV, or ran out to play Mother May I with the neighbor kids, mother cooked and fussed. She was still dressed in the same garb and smelled just lovely. Her hair coiffed, pretty pearl earrings, red lipstick but I don’t remember her saying much.

Father came home around 5 and we sat down to dinner promptly at 6. Meals suggested from Good Housekeeping complete with pictures were served along with our family German recipes. From short ribs and sauerkraut to spaghetti and meat balls to Buddig Beef on Toast our meals always included a dessert made from scratch. Then dishes were done, everything put in its place and the “Now I lay me down to sleeps” were whispered, all to wake up to another day perfectly crafted by Mother.

Then something changed. When the magazines sported housewives in capris serving TV dinners my mother followed suit. Sitting in the back seat of our Country Squire station wagon holding the big bucket of Kentucky Fried Chicken was heaven as we had discovered take-out for dinner. I could smell the deliciousness and warned by mother to keep the lid closed, I would stick my finger in the little air vent to taste its Finger Lickin’ Good-ness. Or driving through of the Golden Arches of McDonalds and holding those warm bags of nutritionless edibles, that aroma heightened my anticipation of delectable goodness, but sadly did not deliver after sitting on the dinner table for several minutes until all were seated and prayers were said. My father complained and was especially opposed to the TV dinners made up of Salisbury steak, mashed potatoes and mixed vegetables. And much to my disappointment our fast food frenzy was short lived.

My mother’s care came from a loving heart but with pressures from the media, she like many women fought to match the presented images and lifestyles. Their identities were often swallowed up in the world of men, and while outer appearances impeccable, inner lives were not, and perceptions became distorted. The compulsion to be, or at least appear to be faultless left many hounded by the stifled cries of , You’ll never Do enough or Be enough, and Your Purpose in Life is to make Them Happy.

And while I remain grateful for the love and care my mother gave me, I emerged into womanhood battling the expectations of my role as a woman, wife and mother, not to mention the dilemma of being skinny and beautiful. Perfection vs authenticity. I struggled against the compulsion to make His world perfect while maintaining breath in my soul. After a year of marriage my first words towards emancipation came when I victoriously proclaimed, “Pack your own lunch , I’ve got to get to work”.

How perfectly silly as I sit 62 years later and reflect on all the mental and emotional time wasted in my journey toward authenticity . How sad I feel for women who lost themselves in the expectations and demands of meeting others needs before their own.

And how lovely that at long last I’m winning the tug of war between the deception of “Be The Best You Can Be” which is never enough and “Revel in Who You Are” which is always enough.