< A Profile of Depression
Make Failure Your Friend >

I couldn’t help but notice him as I’m sitting in the waiting room of the VA while my husband receives radiation treatment for cancer.

He’s an older veteran sitting crumpled like an unmade bed in his wheelchair. He stares at the floor and his face is marked with deep creases and a scraggly beard. He looks so tired and alone and he smells bad.

I feel pressure to talk to him, but I don’t want to. I already feel depleted with all the demands of caring for my husband. I just want to keep my face buried in the latest edition of People Magazine with its mindless dribbling’s on the latest news of punk-face musicians and those tanned firm-bodied actresses, of which I convince myself the photos must have been Photoshopped because it is impossible for anyone to look that good.

The sound of the waiting-room television in the background reporting the news helps to diffuse the silence, but I’m feeling sad for this man. I think about the fact that he served our country in some capacity and here he sits with no one by his side.

So I look over and ask him if he’s up next to receive his treatment. He pauses, then turns his wheelchair toward me, and while he never answers my question, his eyes light up and with a voice that sounds like he smoked Camel Straights his entire life, he tells me all about his living situation, his children and grandchildren who rarely see him, his wife who died a few years back and how he took care of her, all the medications he has to take, and stories from when he was a younger, stronger man.

I did not ask him for any of this information but it becomes obvious this veteran has something to say and wants to be heard. So I listen, at first feigning a genuine interest but as he rambles on, I become genuinely interested. I ask him where he served. “Vietnam”, he growls, “A Hell Hole”, he calls it. I thank him for his service. He gives no response.

With my questions and comments he becomes more animated weaving with wit and humor a brief tapestry of the ins and outs of better days, his achievements and earned awards.

When the nurse calls his name, the light in his eyes dim, as if his returning to reality is snuffing out the momentary reminder of the man he really is.

He is wheeled away and I feel so touched by our encounter. I call out, “It was nice to meet you…”
I see the back of his hand wave as he disappears through the doorway. 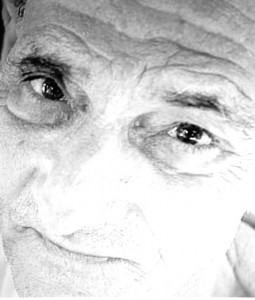 With a warmed heart, I smile.